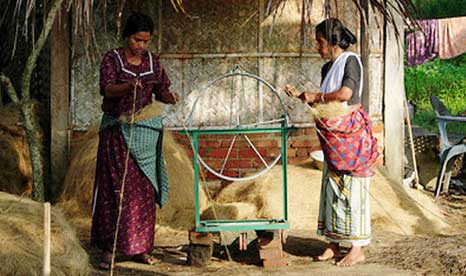 Kasargod ,the northern most district of Kerala, is known for its coir and handloom industries. Fishing is the prime source of livelihood. It is a district with a rare and different beauty. Karargod is known as the land of Gods,forts,rivers,hills and beautiful sea shores.The fort at Bekal is the largest and the best preserved.

Kasargod offers a variety of patterns in temple architecture. The unique style of Madhur Maha Ganapathi Temple, a typical Kerala Style of historic Malik Deenar, the Great Juma Masjid and many other structures speaks in silence with the rich cultural heritage of the region. The rich pageant of "Theyyam's ditties and impersonations - raises Kasargod into a land of fabulous fantasies.

Flanked by the forest covered Western Ghats in the east, Arabian Sea in the west, Talapadi and Trikaripur, demarcating the north and south, Kasargod has grey rocks and barren land amidst dense vegetation, calm lagoons and coconut palms on the coastal belt.

History behind the Bekal Fort

The fort was constructed between 1645 and 1660 A.D. Shivappa Naik of the Ikkeri dynasty is credited with its construction. Another version says that the fort was captured by Shivappa Naik from the Kolathiri Rajas, who were its owners. Around 1763 A.D. the fort was occupied by Haider Ali. During Tipu Sultans' (Haider's son) reign it housed the Huzur of Canara. It was later incorporated into the dominions of the English East India Company. During the British rule, the erstwhile Bekal taulk was part of South Canara district and encompassed the present Kasargod and Hosdurg taluks.

Kasargod was once under Ezhimala kingdom. Nannan was the most illustrious king of this kingdom, whose attempt to expand the territory ended in serious conflicts with the Chera rulers of Vanchi. The people of Mooshaka dynasty, of the 14th Century, popularly known as Kolathiris were the descendants of Nannans. On 16th April, 1862 South Canara District became a part of Madras Residency and Kasargod Taluk came into existence.